A Definition of Global Faultlines 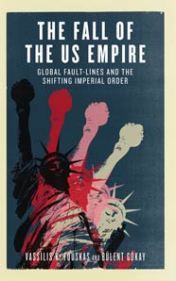 The concept of uneven and combined development, first launched by Leon Trotsky and further elaborated by George Novack, Ernest Mandel and Justin Rosenberg, has partial heuristic and explanatory powers. Although it is extremely useful in capturing global capitalist developments, it abstracts from global political, societal, cultural and ideational structures upon which such developments rest. It attributes primacy to (uneven and combined) economic development as if unable to get rid of the “determination in the last analysis by the economic instance”. Moreover, historically, it seems that it was developed as a concept having its point of departure in British capitalism, which then spreads in an uneven and combined developmental way around the globe. In other words, it reads as a Euro-centric concept.  Accordingly, the world is divided into “the West” and “the Rest,” and a system of knowledge is constructed around a series of binary hierarchies with Europe unfailingly occupying the higher position.  Even Trotsky, the most brilliant mind of the Bolshevik revolution, could not escape Euro-centric bias.

Global Fault-lines is a post-Hegelian notion that does not separate/break the totality into instances (economic, ecological, political, geo-political, ideological, cultural, ideational), while at the same time placing class (Marxist) analysis as a core analytical tool of that totality. Thus, class and social struggle cut across social formations and historical epochs and develop the elements of totality unevenly causing great disruptions, discontinuities and breaks. The global point of view, moreover, is one that has no historical point of departure and registers historical development as societal development in which economics may determine in the first, but not in the last analysis. How does Global Fault-lines, for example, explain Cold War political economy? One way is to methodologically disregard Cold War politics and other developments (anti-colonial movements, Arab nationalisms, revolutions in Latin America, Vietnam, détente, international migration, poverty, the ideational forms of the “war on communism”, environmental problems, May 1968 and so on). But we employ a holistic method seeing all these developments as part and parcel of the “Golden Age of capitalism” (Eric Hobsbawm) co-determining the falling rate of profit in the Atlantic heartland. We believe that a truly global perspective is needed to think beyond narrow Eurocentric approaches to the vicissitudes of global historical changes and continuity.  Global Fault-lines can be applied to pre-capitalist epochs, despite the fact that there we had a different articulation of political, ideational and economic elements there. This is because human history has never been singular, linear and uniform.

Global Fault-lines is inspired by Gunder Frank’s work, in particular his Re-Orient (1998). We view it here as a non-Euro-centric vision of global history. Capitalism is defined both as a mode of production, a concept that abstracts from large scale industry first developed in Britain/Europe, and as commodity mode of production, forms of which we find in a number of Middle Eastern and Asian empires that pre-existed Britain’s industrial breakthrough. If the uneven development of the elements of the totality (economic, political, ideational, cultural, the dominant structures and impositions of empires on their vassals etc.) is extreme, then this leads to severe disruptions, crises and even wars (whether local – conflict over a pipeline project in Chechnya – regional – the eight years war between Iran and Iraq – or global – WWI and WWII). Just like the movements in the tectonic plates being originated in Earth’s radioactive, solid iron inner ore, the vast shifts in the structures of the international system are the outcome of changes that have been taking place beneath the surface of social life for decades, if not centuries and millennia. In historical periods that the elements of the totality are into a kind of symbiosis, then there is relative peace and the totality balances out, yet without undoing the system’s fault-lines.