The vilification of Yassmin Abdel-Magied: Anzac as apologia and religion | Binoy Kampmark

Posted on April 26, 2017 by globalfaultlines

So great has the cult of Anzac Day become, any dissenting voices are now attacked, condemned and vilified, writes Dr Binoy Kampmark.

SOAKED TO THE CORE, Melburnians gathered around the War Memorial in thousands, gazing at the flickering, all-resistant eternal flame in an annual tribute to Australia’s fallen. Each year, the secular religion of Anzac (the Australian and New Zealand Army Corps) receives more adherents, gathers a few more followers and nabs a few more converts among the young.

So relentless has the progress of this movement been that critics of it are condemned and vilified, the most recent example being the attack on ABC part-time television presenter and advocate Yassmin Abdel-Magied.

Abdel-Magied had suggested, in a breezy Facebook post, that Anzac Day might also be used to reflect on the suffering of individuals on Manus Island and Nauru, and in Syria and Palestine. An online petition to sack her from ABC duties immediately blazed through social media, garnering 15,000 signatures in 24 hours.

The mania for commemorating Anzac also shows in budget outlays.  Between 2014 and 2018, $562 million will be expended in commemoration services of the First World War. This staggering amount exceeds that of other nations involved in the conflict, including the combined budgets of Germany, Russia, Belgium, France, the United Kingdom, Italy, Bulgaria, Greece, Serbia, Romania and the United States. France, by way of example, is set to spend 120 million euros. (To date, only 30 million of it has been secured from public institutions.)

What the Anzac Day ceremonies do not do is reflect upon political folly and irresponsibility. This is the event’s greatest triumph — that of political deflection. Human sacrifice is the enormous tent under which political blunders and military catastrophes are subsumed, negating any questioning about decisions made and engagements undertaken in conflict.

Gallipoli in 1915 was a defeat of monumental proportions for the Anzac soldiers, a needless slaughter born from a Churchillian gamble. Editors and politicians chose to see it differently, finding in murderous folly a “baptism of fire”. Importantly, it was an invasion of the Ottoman Empire, a violation of sovereignty that has somehow been lost in the annals of saccharine reflection.

The modern disaster theme, with wheels of doom re-invented for the next futile deployment, can be gathered in the latest visit of Prime Minister Malcolm Turnbull to Iraq and Afghanistan. These are both engagements without end, costly to life and taxpayer, and do little to mark out, let alone define, the national interest.

In the case of Iraq, the need to train local security forces always seemed absurd given the existence of a functioning state prior to the ill-conceived, illegal invasion of 2003, of which Australia was an enthusiastic participant.

Having essentially destroyed Iraq, crippling its infrastructure and disbanding its security forces before a hail of sectarian vengeance, Australian soldiers and personnel then found themselves in acts of feeble reconstruction.

The public relations here is typical, and again an annex of the deflection program so resonant in Anzac Day propaganda: Australian forces deemed worthy participants in the Building Partner Capacity Mission at Taji, responsible, according to the Sydney Morning Herald, for the training of more than 20,000 Iraqi Security Forces and 3,000 federal police.

‘What the Anzac Day ceremonies do not do is reflect upon political folly and irresponsibility. This is the event’s greatest triumph — that of political deflection. Human sacrifice is the enormous tent under which political blunders and military catastrophes are subsumed, negating any questioning about decisions made and engagements undertaken in conflict.’

As this training takes place, suicide bombers continue to act as deep, bloody reminders about this mission. Another is the presence of Islamic State or Daesh, a target of the Australian Special Operations Task Group assisting the Iraqi Counter-Terrorism Service — this the offspring of a deranged mother of necessity in the wake of Iraq’s sectarian violence in a post-Saddam world.

The vulgar pieties across the networks further serve to show how journalists have become votaries to the Anzac cult. Priests and priestesses interview veterans and politicians about the current role of Anzac and its importance. Points about how best to rehabilitate the broken on returning from conflict are bandied about without asking the question as to why they were sent to a distant theatre to begin with. Questions are asked about how best to educate children on the subject.

The Anzac Day Commemoration Committee states the prosaic point about carrying the rituals through the young:

‘By building young children’s understandings about traditions, facts and folklore of ANZAC Day, the many real life stories of sacrifices and heroism of everyday Australians will not be lost, but be handed down to future generations.’

The battle over what those facts are, let alone the mythologies that tend to obscure them, is not something of interest to the memorialisers. (A few rear guard actions have been fought against this, notably by (IA contributors) Dr David Stephens and Dr Alison Broinowski in the edited collection The Honest History Book.)

More important are the social activities that might engage the entire family, as war can be so much fun. The South Australian Advertiser lists five ways ‘to keep children entertained in South Australia on Anzac Day’.

These include horse drawn trams to Granite Island ‘where eagle-eyed kids can keep an eye out for penguins’ or seeing the Anzac Day Variety Concert at Elizabeth’s Shedley Theatre. 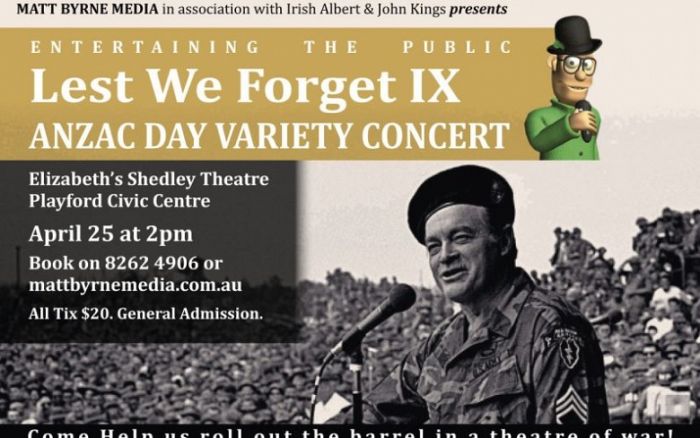 ‘Come Help us roll out the barrel in a theatre of war!’ So respectful of the fallen! So much fun! (Image screenshot mattbyrnemedia.com.au)

To expend energy, children will find Lollipop’s Playland and Café a treat. And so it goes on.

The rituals of the secular religion demand consistency. Turnbull has followed, unreflectively, in the steps of a historically dysfunctional continuum. There is no self-examination, merely belief. There is no questioning, merely acceptance.

‘More than 100,000 men and women have died in the service of our nation. Many have been left wounded in body and spirit. Their sacrifice has protected our liberty and our values. And their legacy continues in the work of those who serve today.’

https://www.facebook.com/plugins/video.php?href=https%3A%2F%2Fwww.facebook.com%2Fmalcolmturnbull%2Fvideos%2F10155331651681579%2F&show_text=0&width=560Dr Binoy Kampmark was a Commonwealth Scholar at Selwyn College, Cambridge. He lectures at RMIT University, Melbourne. You can follow Binoy on Twitter @bkampmark.

This work is licensed under a Creative Commons Attribution-NonCommercial-NoDerivs 3.0 Australia License

This entry was posted in Uncategorized. Bookmark the permalink.